Melanculia: no tabus, no censorship, no excuses, just raw feelings converted into music 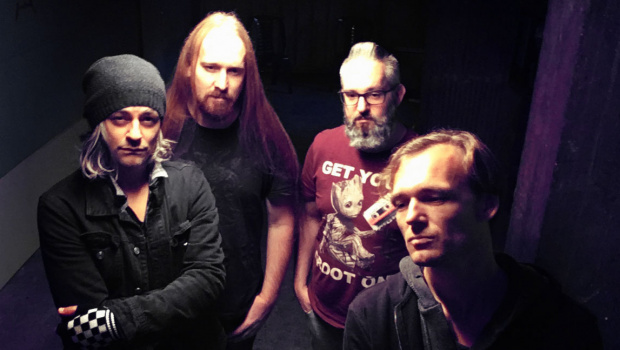 Nino Sable, one of the most active musicians on contemporary scene is well known with his flagship Aeon Sable. What is he doing in the shadows? He told us on the occasion of awakening his dark indie alternative project Melanculia. Straight back to the roots...

SANCTUARY.CZ: Hi Nino, how are you during these autumn days?

Nino: Well, I must confess that I hate autumn and winter but I’m ok so far.

SANCTUARY.CZ: Well I hope it’s not that bad. Nature is getting ready for hibernation, the days are getting darker and you can feel melancholia in the air. Which leads us to the band we will be talking about today. Does autumn influence you in some special way? Are you e. g. more creative during this period?

Nino: I’m always creative. But I prefer summer. In summer I create less but the output is better. I spent last summer composing a completely new album for Melanculia and it was a hard thing because I hadn’t worked on Melanculia for years. It took a lot of time to get into Melanculia’s mood again but then, after a lot compositions that weren’t worth to be mentioned, I finally found my way back to the path of Melanculia and yes. I’m happy so far.

SANCTUARY.CZ: Our readers know you mostly as a leader of goth rock act Aeon Sable. But you stand also behind projects like Deied or Melanculia. What brought you to revive the latter? Was there any particular impulse that triggered this renewed activity?

Nino: Aeon Sable is of course a very good project and I live the work with the crew. Everyone in the crew is very professional and it is a lot of fun to tour and create music with them. I just missed the way I started making music and so I woke up the dead in order to find my roots. Melanculia has no label, no promoter… I want this to be a small underground act. Not as professional as Aeon Sable ;-)

SANCTUARY.CZ: Tell us something about your musical roots. You said that except the gothic subgenres you’re also into black metal and even world music. Was it always like that or your current music library contains some other “guilty pleasures” we don’t know about yet?

Nino: Oh yes. It was always like that. For me, the most important thing in music is the spirit that lives within. Composition and lyrics, drama... everything must be beautifully melted together. And you can find beautiful spirits in (nearly) every kind of music. (if you are open minded.) Of course there is also a lot of shit out there. But most of the artists tend for perfection. Since I’m swimming in the music universe, I have the pleasure to receive a lot of brand new releases… people write me on Facebook, showing me their latest releases and that’s really cool. I discovered "Jacula" lately. A very old project from Italy… I also like the last release of “The Witch Will Die Tomorrow” and “Artica”… you see… I’m living in the underworld ;-) Going more mainstream, I also love the last output of Iggy Pop and Peter Murphy…

SANCTUARY.CZ: Do you even remember what the very first record you ever bought was?

Nino: I remember. It was… a crazy story. CDs were just hitting the market and there was one CD I wanted to buy. I had just moved to Povoa de Varzim (Portugal) a few days before and I didn’t know anyone in the new town. I saw that CD in the record store, it was Faith No More’s “King For A Day, Fool For A Lifetime” and I just wanted to have it.
My money wasn’t enough and so I went to the beach thinking on how I could get the needed money to buy the CD. On the beach there were a bunch of metal heads and so I started talking to them and I asked them if some of them would like to give me some money to buy the CD and that was what happened.
By the way, the metal heads in Povoa de Varzim were very cool. We started meeting on weekends, copying CDs to cassettes, enjoying MTV’s metal shows and going to concerts in Porto.

SANCTUARY.CZ: What about your current relationship to the cassette tapes?

Nino: Cassette tapes are the media of the youth underground movement during the eighties and nineties. In my opinion... dead.

SANCTUARY.CZ: Melanculia’s story goes quite a long way back to history. You started it in 2002 and compared to the rest of your works this one has much more songwriting approach. What does Melanculia mean to you? Is it like a valve for your emotions you can’t express elsewhere?

Nino: Melanculia (now) is 100% Nino. No tabus, no censorship, no excuses. Just raw feelings and thoughts converted into music. I started Melanculia back in 2002. Now you may wonder why there aren’t more releases from Melanculia… in fact, there are, but the quality of some of the first albums were so bad that I decided to erased them. In fact, the upcoming album is going to be my sixst release with Melanculia so far. 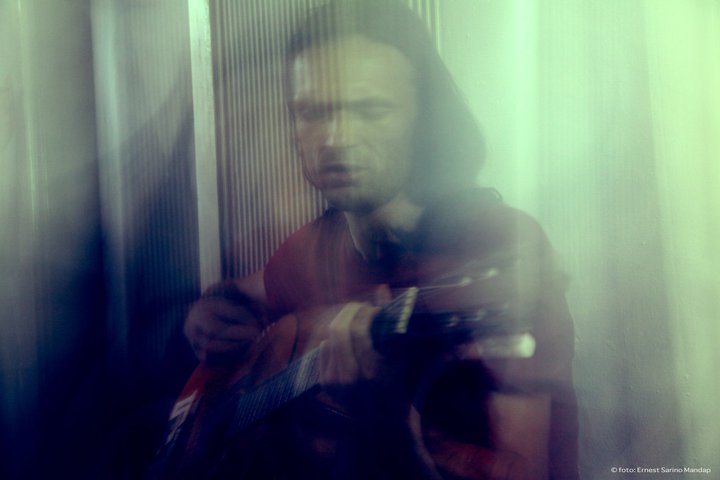 SANCTUARY.CZ: You re-released two of your latest albums “Paths” and “The Dazed Prophet” on your own during last weeks. Are there any other albums you were thinking about re-releasing? Or do the listeners that discovered Melanculia recently have a chance to get to the first three albums?

SANCTUARY.CZ: More and more artists are into remastering their old stuff lately. Did you process the sound of “Paths” and “The Dazed Prophet” prior their new release?

SANCTUARY.CZ: Great! I‘m so glad for that, because you now, it could be good for the musician, to renew old stuff with current know-how and new equipment but the truth is that the release usually comletely lost it’s spirit of the time, if you know what I mean.

Nino: I fully agree. That’s why I didn’t re-recorded them.

SANCTUARY.CZ: All the lyrics on the records are in English. Don’t you feel like trying a song in German or even in Portuguese, too?

Nino: That’s a good question… I love Portuguese and I think that Portuguese is a wonderful language to be sung. In Aeon Sable we did a few songs including Portuguese language and they are very beautiful. In my opinion German language sounds very harsch and is more appropriated for industrial songs ;-) I personally don’t like German language that much, even if it is considerated the language of the philosophers and poets…

I once did a Melanculia track with some Portuguese word but I never officially released it under Melanculia’s flag. It is only available at youtube. I guess it is called “Quem conhece os meus amigos da alfacoop”.

SANCTUARY.CZ: I can’t help myself and have to ask about penetration of songs between Melanculia and Aeon Sable. Is it their potential why the songs fit into both projects? I mean tracks like “Long Road Out Of Hell” or “Fabulous Land.”

Nino: Melanculia, Deied, Aeon Sable, Hqmr and all the other projects are all shadows of me. So it is obvious that we sometimes make a “stormed” version of the best tracks under Aeon Sable’s flag.

Nino: Hahaha. Hqmr is not to be seen as a serious project. A friend of mine, Albert Q. is the one behind the music. Din and I just add some ingredients. A funny fact is that we first created a “White Snow” Version for and with Hqmr and then we “recycled” parts of the lyrics in order to compose Aeon Sable’s “White Snow”. Albert Q and I were good friends and we have plans to do more tracks in the same mood as Hqmr in the future.

SANCTUARY.CZ: And btw. what does the Hqmr means? It’s a shortcut, right? I always thought that it’s something like "high quality music range" :) but I’m not sure.

Nino: There was a deeper meaning behind the letters "Hqmr" but it is so deep that I can't remember anymore. ;-)

SANCTUARY.CZ: Melanculia has always been your solo project. How did you get to the decision to build a band around you and even joining a live drummer?

Nino: I was smashed down with mental problems some time ago and my Aeon Sable band mates saved me telling me that we should revive Melanculia together in order to get me back to life. I’m not sure if this was a good idea. Haha. But it feels ok for now.

SANCTUARY.CZ: Ok I hope the problems wasn’t something very serius and it’s everything behind you! Btw., the drummer Drobi looks like a funny guy. Do you know each other for a long time or did you get him through some kind of an audition?

Nino: Drobi is new to me but he is pretty good on what he does. He is a longtime friend of Quoth (Aeon Sable Bass) and… well… that’s how he joined the crew.

SANCTUARY.CZ: Do you work as a band in the studio, too, or do you record all the instruments by yourself?

Nino: Right now Melanculia’s music is created all by myself. I play all the instruments (even if I’m not good at it) and I do all the recordings etc. on my own. In the coming days and weeks I’ll enter studio (a new one) in order to make a great album out of it. In the studio I will have the help of one of my good old freinds I worked with a long time before Aeon Sable. (Tonemaster D.)
I want to change the way we developed music in the future and start making songs together with the crew in order to get a more complex construction of sound.

SANCTUARY.CZ: Can you already tell us some details about the new album?

Nino: I guess we will have around 40 minutes of dark luciferian indie alternative music. If you know “Paths” and “The Dazed Prophet” you probably already know where the way may lead to ;-)
The album is going to be called “The Seventh Circle” and will contain around 7-9 tracks. In advance I was looking for a record label to release the new album but the only label who reacted told me that for someone like me, it would be the best thing to release it on my own, since I have enough experience with label work due to the time I spend working for and with afmusic and all the other bands. So, I opted to release it on my own. Sales will only be possible through http://melanculia.bandcamp.com or at our concerts. You see, Melanculia is an underground indie alternative band. Not just in terms of sound but also in terms of distribution, marketing, attitude. Maybe we will opt for crowdfunding as well in the future, just like we did with Aeon Sable’s "Saturn Return" a few years ago.

SANCTUARY.CZ: Your social networks look like you’re intensively rehearsing for live shows. Can we look forward to seeing Melanculia also in Prague?

Nino: Once our crew is prepared to play live, we will play where ever people want us to.
Our first concert will take place here around the corner, in Oberhausen at “Druckluft” on December 1st. There are also some other live shows planed. But first we have to survive the concert in our home area. Prague is very nice and all of us want to visit Prague as soon as we can. Call us and we’ll be there!

SANCTUARY.CZ: Great! We will look forward! Just one more tricky question. ;) Is there any special connection between 70’th Aleister Crowley’s death anniversary and the first Melanculia show which will be on the same day?

Nino: Let’s say it is coincidence. ;)